In many cases, Stack and Nix are considered competing toolsFor example, Chris has previously written an article explaining Nix in terms of Stack and how Nix can be considered a replacement for Stack. rather than complementary ones. However, there are circumstances in which you want them to learn to play nice together. If you find yourself in that situation, here are some tips from the trenches, as it were, on using Stack’s Nix integration.

How Stack gets GHC

A Stackage package set specifies not only the particular versions of Haskell packages that work together, but also the specific version of GHC that the packages are known to work with. 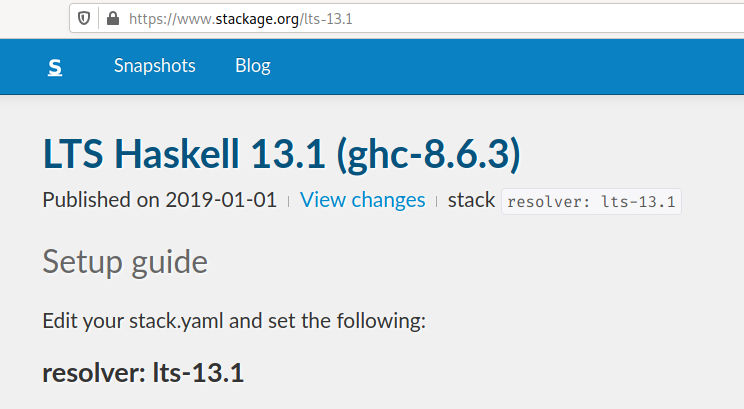 When you use Stack, it will install the appropriate Haskell compiler automatically. We are not supposed to think too deeply about the internal machinations of Stack and how it manages to get GHC installed, it just does. Unless it doesn’t. If we try to use Stack on NixOS, its default GHC-installation techniques fail:

Fix this by enabling Stack’s Nix integration features.Even when you are not using NixOS, you can use the Nix integration if that is your preference. You must first have the Nix package manager installed. There are various ways to do this:

We recommend the last option for NixOS users; Stack will not work at all on NixOS without Nix integration enabled, so you may as well turn it on for all your projects at once.

Create the file ~/.stack/config.yaml if it doesn’t already exist, and add the following lines to it:

With this option enabled, Stack will obtain GHC using the Nix package manager instead of its own methods.

As a Nix user, you likely have an environment variable called NIX_PATH.In a typical Nix setup, you probably use the nix-channel program to manage the directories that NIX_PATH refers to.

If NIX_PATH is not set up at all, you will see an error like this:

Most often this happens to us when one of the two components has fallen far behind the other.

The second case occurs because the maintainers of nixpkgs don’t support old versions forever. In particular, nixpkgs tends to quickly remove older minor GHC releases. GHC version numbers have the form “X.Y.Z” where the final component Z is incremented for releases that contain only bug fixes, and so moving from GHC 8.6.3 to GHC 8.6.4 is considered a minor version upgrade.

It isn’t unusual to want an older major release version, because major versions can change functionality; code that compiles with GHC 8.4 might not compile with GHC 8.6. But typically there is no reason to ever continue using a previous minor version, and so nixpkgs feels comfortable dropping support for 8.6.3 once GHC 8.6.4 is available. Stack, however, does not take the perspective that minor releases are equivalent enough to be interchangeable.

Perhaps the most common Haskell package with a native (non-Haskell) dependency is a compression library called zlib. The Haskell package is mostly just a wrapper over the underlying library which is written in C and must be installed separately.

Trying to use a package that depends on zlib, if you don’t have the C library installed, will result in this error:

To add the native zlib dependency to the environment in which Stack compiles the zlib Haskell package, we need to go back to our Stack configuration file, ~/.stack/config.yaml. Under the nix: section, add a subsection called packages.

Under packages: is a list of Nix packages. Here, the name of the Nix package we need happens to be the same as the Haskell package, but this is not always the case. Make sure each package you list here matches the name of a Nix package.

Even if you don’t use Nix yourself, this can be a courteous thing to provide for Nix users who may use Stack to work on your project.